Built in 1936 through the Works Progress Administration, Spartan Stadium (then called Lima Stadium) has been center stage for many special memories: from the rival South-Central Thanksgiving football games to the packed house witnessing the Spartan's recent return to the playoffs.

Today the stadium, which has an artificial field surface and hosts tournament football, soccer and track events, has undergone a $1.8 million renovation. The renovation was completed in August of 2014.

The project included adding a concession stand, ticket booth and restrooms to the east side (visitor side) of the stadium. The east grandstand was replaced in 2010.

New home and visitor locker rooms were built on the north side of the stadium. The facility also now includes a room for game officials and a storage area. A new north parking lot is used for team buses, marching bands and officials.

The new west side included a new grandstand, two sets of restrooms (one set on each end of the stadium), a concession stand, covered vestibule and press box.

The entire existing west side of the stadium was torn down. Ongoing structural studies showed that the work was needed, or else the district would have to start reducing its load. 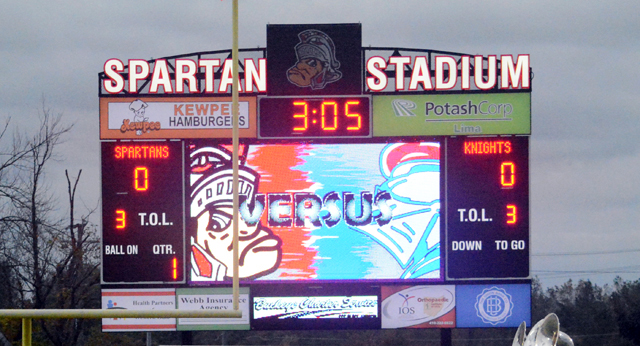 Along with the renovations, the Lima School Board voted to change the name to Spartan Stadium. The name change follows along with a renewed Spartan spirit in the school district and the community.

The newest addtion to the stadium is a state-of-the-art video scoreboard. The scoreboard is possible thanks to the generous support of our corporate sponsors: Kewpee Hamburgers, Nutrien, Webb Insurance, The Union Bank, Orthopaedic Institute of Ohio and Health Partners of Western Ohio.